Mr Olbrycht presented activities of the URBAN Intergroup working at the European Parliament underling some key aspects of urban related issues. Housing, energy efficiency in buildings and urban-rural linkages have been mentioned. During the meeting The Manifesto for Cities, an initiative of the World Urban Campaign which was launched in March 2010 at the sixth session of the World Urban Forum in Naples, was discussed. In conclusion, Jan Olbrycht stressed that the urban dimension should be reinforced in the EU development policy.

The Manifesto for Cities 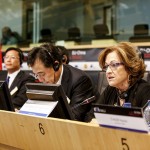 URBAN Intergroup was represented during the first EU-China Mayors’ Forum held on 19 and 20 September in Brussels.

On Wednesday September 19th Jan Olbrycht, President of the URBAN Intergroup, delivered a welcome message to the participants of the seminar “Governing sustainable urban development: Experiences from China and the EU”. He underlined that urbanization process in China is a very interesting field of observation for EU urban actors. Mr Olbrycht stressed that in spite of historical differences of urban settlements, “the EU and China can learn from each other about good and bad urbanisation experiences.” “Today, in spite of differences of scale and taking into account the number of inhabitants, we are able to compare problems and challenges that European and Chinese cities are facing” – he concluded.

Ms Gutiérrez-Cortines represented the Intergroup on Thursday September 20th during the discussion on Sustainable Urban Planning and Construction of Low-carbon Eco-cities. She stated: “We do not find a solution to problems of sustainability, efficiency and climate change in big international conferences but at local level, in the cities. Mayors have taken the challenge of tackling climate change with great responsibility, and they work on it in their territory.”

More information about the Forum