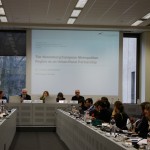 The aim of this seminar was to present the results of RURBAN preparatory action to the European institutions and to discuss the way benefits of rural-urban partnerships can be fully taken into account in the 2014-2020 programming period of cohesion policy and rural development policy.

During the introductory session, Walter Deffaa, Director-General of Regional and Urban Policy, and Jerzy Plewa, Director-General of Agriculture and rural development, underlined a very good cooperation between DG REGIO and DG AGRI on rural-urban partnerships. They stressed the fact that the coincidence between the starting point of the new programming period 2014-2020 and the closing of the RURBAN preparatory action can be a drive for the strengthening of the urban-rural cooperation on the ground. Moreover, they underlined that the results of the RURBAN preparatory action had already an impact in the funds’ regulations for the 2014-2020 programming period.

Regional and local stakeholders insisted on the complexity of peri-urban relations and difficulties in the cooperation. At the same time, they underlined that structural funds offer a unique opportunity to work across peri-urban territories. They welcomed the possibility of using multi-fund programs (ERDF and ESF) which will facilitate implementation of urban-rural partnerships.

Peter Simon, Vice-President of the URBAN Intergroup who initiated this preparatory action, explained that RURBAN “opened a door” for partnerships but that it would only be possible to asses in the future how Member States used this opportunity to develop urban-rural partnerships.

In conclusion, Jan Olbrycht, President of the URBAN Intergroup, asked the European Commission to check urban-rural partnerships while analyzing partnership agreements. “Let’s use European money to put people work together in urban and rural territories”, he added.

We are very pleased to present the 11th issue of the URBAN newsletter in English, French and Polish.