On November 21st members of the URBAN Intergroup took part in a meeting co-organised with EUROCITIES Metropolitan Areas Working Group. The main topic of the seminar was the presentation and discussion around the report on “Metropolitan Areas in Action”. This report is a work of specialists, from various countries, researching on metropolitan areas. The final report represents 3 years of exchange of knowledge and 1 year of research, ensured by the Metropolitan Institute of Budapest.

First part of the study presents the main findings of the research, whereas the second part focuses on five cases of European metropolitan areas: Lille, Warsaw, Brno, Bratislava and Stuttgart. The report was presented by Peter Austin, the planning advisor at City of Oslo and 15 experts taking part in the MAIA project were present to exchange their experience with the URBAN Intergroup’s members.

Final results arouse much interest and a debate followed with the exchange of opinions and ideas.

“City is like a human being. You cannot impose rules and let it adapt to them. We, people interested in urban development have to work together and we need to cooperate with the urban areas,” said Cristina Gutierrez-Cortinez (EPP/Spain).

The MAIA study also shows that what concerns the metropolitan areas and their further development is their size. Therefore should we adopt a proper legislation for the metropoles?

“Can we say that metropole is a legal status? If we want to give any legal status to these areas firstly we have to discuss more if such status helps? What should count is not the name we give to these areas, but specific processes they are undergoing,” commented and concluded Jan Olbrycht (EPP/Poland). 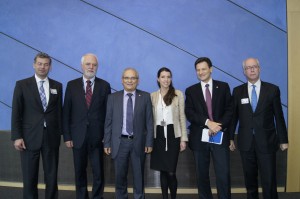 The conference brought together more than 60 participants, including MEPs, European Commission and local authorities’ representatives as well as European stakeholders from the industry and the real estate sector. The Landlords in Europe report is a comparative analysis that examines the private rented market in Europe from a practitioner‘s point of view. The report highlights the key issues which landlords face in order to improve the understanding of the legislative frameworks in Member States. The document brings together details on the rental laws, tax regimes and planning policies which govern the private rented sector in twelve countries across Europe.

UIPI is a pan-European association comprising 30 organisations from 28 countries. Jointly, they represent more than five million property owners and some 20 million dwellings. Founded in 1923, its member organisations share the common goal of promoting the rights and interests of private property.