On Thursday, June 11th the URBAN Intergroup held its monthly meeting in Strasbourg. This month participants discussed the outcomes of the two-day Informal Meeting of Ministers Responsible for Territorial Cohesion and Urban Matters which took place in Riga on Tuesday and Wednesday (9-10th June).

More information about the Informal Meeting and media coverage can be found on the webpage of the Latvian Presidency.

The last meeting of the URBAN Intergroup took place on Thursday, May 21st in Strasbourg.

The main point of this month’s meeting was presentation of the EU project EPOurban by Mr Karsten Gerkens, Director of the Office of Urban Regeneration and Residential Development for Leipzig City Council. Core outputs, results, conclusions and next steps included in the EPO urban: Enabling private owners of residential buildings to integrate into Urban Restructuring Processes policy paper were discussed. A vivid debate with URBAN members followed and various issues regarding the urban regeneration have been raised.

The meeting was a perfect occasion to exchange knowledge and practices leading to a better urban policy in the future. More information about the meeting in 15th issue of the URBAN Newsletter. 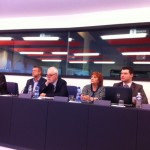 On Thursday, April 30th members of the URBAN Intergroup took part in the first monthly meeting in Strasbourg. The main point of April’s encounter, under the slogan “Triggering multiple benefits for urban areas it’s more than renovation”, was building renovation.

URBAN members had a chance to listen to and debate with professionals in field of sustainable building renovation. Three presentations deepening the topic of were delivered by guest speakers from Renovate Europe Campaign, European Commission and Energiesprong.

Members of the URBAN Intergroup present to the meeting appreciated received knowledge, whether it is theoretical or practical. A vast discussion followed the three presentations.

Next URBAN monthly meeting with take place on Thursday, 21st May in Strasbourg.

On Wednesday 7th of January URBAN Intergroup held a first meeting regrouping all members and partners.

The meeting was chaired by Peter Simon (S&D/Germany), Vice-President of the URBAN Intergroup. The main point of the meeting was the presentation of the State of play of the EU Urban Agenda by Christian Svanfeldt from the European Commission. After the presentation, members and partners expressed their doubts and concerns about the EU Urban Agenda and called for a common action within the Intergroup.

The newly nominated bureau was presented and a draft agenda of actions discussed.

As of January 7th, URBAN Intergroup counts 83 MEP members from all of the political groups and 93 partners. Coming from various horizons, they all have one thing in commun – their interest in urban issues.