Permanent Representative of the European Investment Bank in Brussels,

is pleased to invite you to the “EIB Lunch Dialogue”

please reply before 8 June to gwzxxjqxwjhjuyntsEjng3twl

Due to the limited capacity of the conference rooms, the EIB reserves the right not to accept registration above that capacity.

An e-mail confirming your attendance will be sent to you a few days before the event. 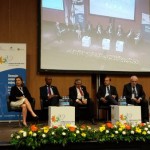 URBACT with the support of Directorate-General for Regional and Urban Policy of the European Commission is organising a launching event of a series of six new URBACT thematic reports “Cities of Tomorrow: Action Today”. Published as a result of URBACT capitalisation process these reports focus on key urban challenges. The launching event will take place in Brussels in the European Commission Albert Borschette Conference Centre on Tuesday 18 June 2013, 11:00-14:00. Come and debate the big issues facing European cities with our expert panel and take the opportunity to submit your own questions.  Register now!
URBAN Bureau