URBAN Intergroup at the Covenant of Mayors Ceremony 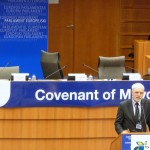 Jan Olbrycht, President of the URBAN Intergroup, participated on the 29th of November in the Covenant of Mayors 3rd Ceremony at the European Parliament in Brussels.

The Ceremony gathered mayors from all over the world to confirm their commitment to the Covenant of Mayors. Based on many examples showed during the meeting, the participants discussed about the contribution of cities to the reduction of CO2 emissions and their plan for local energy actions.

“Covenant of Mayors clearly shows that cities are not waiting – they are actively participating in the European policy while setting and implementing a very ambitious agenda going beyond the European targets.” – Jan Olbrycht, President of the URBAN Intergroup, underlined in the summary of one of the panel discussions.

The Covenant of Mayors is a European Commission initiative supported by the European Parliament and by the Committee of the Regions. The Covenant signatories aim to meet and exceed the European Union 20% CO2 reduction objective by 2020 by increasing energy efficiency and the use of renewable energy sources on their territory. Including the 263 mayors who joint the Covenant at this year’s ceremony, the number of signatories reached over 3000.

More about the Covenant of Mayors

At the occasion of the seminar on “Local development as a key pillar of post-2013 EU integrated territorial policies”, local and regional authorities expressed their hope to see the artificial separation between different cohesion-related funds erased so that they may truly focus on the development of all of Europe’s territories. The participants discussed about the new territorial approach presented by the European Commission in the proposals for cohesion policy regulations for 2014-2020. Special attention was devoted to the new instruments such as Community-led local development or Integrated Territorial Investments.

The seminar, held on 29 November 2011 at the European Parliament in Brussels, was organised under the patronage of the URBAN Intergroup by the Council of European Municipalities and Regions (CEMR) in partnership with the Convention of Scottish Local Authorities and the Romanian Municipalities Association. Jan Olbrycht, President of the Intergroup, along with two Vice-Presidents – Ramona Manescu and Lambert van Nistelrooij, intervened during the meeting on behalf of the URBAN Intergroup.