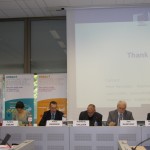 On Tuesday June 18th, URBAN Intergroup together with DG REGIO organised an event dedicated to the case study recently published by the European Commission. Jan Olbrycht, president of the URBAN Intergroup opened the event and was moderating the debate.

END_OF_DOCUMENT_TOKEN_TO_BE_REPLACED

On Tuesday, June 18th, URBAN Intergroup and DG REGIO organize an event dedicated to a recently published study – “Urban development in the EU: 50 Projects Supported by the ERDF in 2007-2013″. The conference will take place in Conference centre A. Borschette in Brussels.

The URBAN Intergroup event will be followed by the URBACT launching event of a series of six new thematic reports “Cities of Tomorrow: Action Today”

The conferences will take place in Conference centre A. Borschette in Brussels.