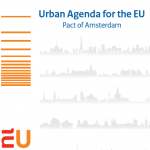 30 May 2016 was a symbolic and historic day for the urban dimension of European policies. Ministers responsible for urban matters adopted the Pact of Amsterdam which officially set up an EU Urban Agenda. Members and partners of the URBAN Intergroup are particularly satisfied. They pledge for years for the recognition of the role of European towns and cities.

“The Pact of Amsterdam is a turning point in the EU’s history. It confirms the importance of the urban dimension in EU policies. But what is more, it introduces very concrete set of actions which will require partnerships in all levels of governance, between European, national, regional and local authorities and other stakeholders. I am very proud that the work of members and partners of the URBAN Intergroup at the European Parliament has been recognised, for the first time, in an intergovernmental document!” – declared in Amsterdam Jan Olbrycht, President of the URBAN Intergroup.

Iskra Mihaylova, Chair of the EP’s REGI committee and member of the URBAN Intergroup, who represented the European Parliament during the ministerial meeting said “I am convinced that the adopted on 30.05. Pact of Amsterdam, with its innovative governance structure based on strong partnerships, will improve the implementation of EU and national policies on the ground, by involving cities in the design and implementation of urban-related policies as a way of making them more effective, efficient and inexpensive. To better address urban challenges such as air quality, migrant inclusion or urban poverty, regions and cities are ready to boost bottom-up urban innovations across the Union, whilst the Parliament will carefully consider the results and recommendations of the thematic partnerships established under the Agenda. The EU Urban Agenda should also provide good cooperation and consistency with cities and regions from around the world to share sustainability goals and innovative policies within the framework of Habitat III Agenda.”

During the opening of the Committee of the Regions’ Forum on the EU Urban Agenda, Kerstin Westphal, EP rapporteur on the urban dimension of EU policies, underlined that despite of the success of the Pact “we need to know who will be responsible for the implementation of the EU Urban Agenda, especially inside the European Commission! That is why we need to put pressure on this!” She mentioned as well that the functional areas are very important and the cooperation between urban and rural territories is crucial to solve a lot of problems.

Lambert van Nistelrooij, vice-president of the URBAN Intergroup said: “A first step for the Cities was already made in December 2015 when 371 million Euro was made available for Urban Innovative Actions. Now the Dutch presidency has forced a breakthrough for the cities in Europe with the Pact of Amsterdam. No new regulations, but a commitment from the cities in Europe to contribute to resolving central problems, with in return direct access to the European Funds. I came forward with the proposal for this Pact, which has been taken over by the Dutch Minister Plasterk during the Informal Cohesion Summit in Riga last year. ” 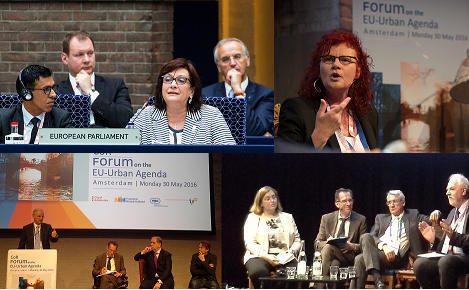