Over the two days of the conference organised in the partnership with the URBAN Intergroup, the participants discussed both the European and Polish objectives in the energy sector stressing the role of cities and towns in their implementation. The EU strategies and the regional policy assistance to combat the negative effects of climate change were illustrated by the presentation of some studies and numerous practical examples. The event gathered about 150 participants – politicians and managers from local and regional level, and also several representatives from EU Institutions and a number of organisations active in the energy sector. 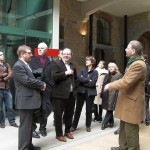 Members of the Intergroup along with few partners spent half a day visiting the city ofBrusselsand discussing urban related issues withBrusselsauthorities. The participant visited Palais de Justice, State Administrative Centre (Cité administrative de l’état), Tour et Taxi and Brussels International Logistic Centre and got information about the development of each place and problems encountered over the years. The study visit included also a meeting with the representatives of the Brussels Region and the presentation on “Urban development challenges of the European District”. 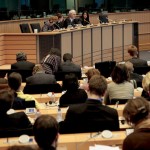 After the official approval of the URBAN Intergroup at the European Parliament, members of the Intergroup met in Brussels with partners and organisations interested in the cooperation with the Intergroup. The meeting started with the presentation “Global challenges for world’s towns and cities – example of sustainable urbanisation in developing countries” by Jean B. Bakole, Director, UN-HABITAT, Representation Office to the European Union and Belgium. The rest of the meeting was devoted to the presentation of the objectives, priorities and organisational matter related to the work of the Intergroup and to the discussion about the cooperation with the partners.

At the beginning of the new parliamentary term the URBAN Intergroup organised together with one of its partners, EUROCITIES, a reception to discuss challenges lying ahead for European cities. This event provided an opportunity for a meeting among Members of the European Parliament and local leaders, and an exchange on how European cities are tackling current challenges such as economic recovery, climate change or social inclusion – the burning issues of the years to come. Participants discuissed the common priorities in both EUROCITIES and the European Parliament’s work and agreed to cooperate in order to find the best EU strategies for Europe’s towns and cities.