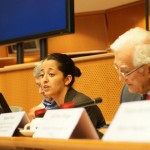 “Local solutions are often the key to success” argued Günther Öttinger, European Commissioner for Energy on the occasion of the conference organised at the European Parliament. The speakers stressed that cities act proactively for sustainable development. They are key actors to achieve the 3×20% target and to mitigate and adapt to climate change. They emphasized also the role of cities as generators of green growth and the need to further help them achieve this goal. The event, jointly organized by the Intergroup “Climate Change, Biodiversity and Sustainable Development” and the URBAN Intergroup, brought together more than 100 participants, including MEPs, representatives from the European Commission, from Member States as well as NGOs, academic organizations and the private sector. 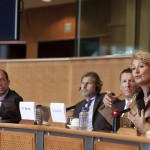 At this high level meeting organised as a joint initiative of the URBAN Intergroup, Brussels Capital Region and EUROCITIES, participants along with Johannes Hahn, European Commissioner for Regional Development, voiced their support for the central role that cities must have in the future EU cohesion policy. The conference showcased examples of actions and projects already supported by EU structural funds in three different sessions that focused on integrating people and place-based policies, on working in partnership and on variable geography. It gathered over 100 participants from local and regional governments and the European institutions.

Smarter Cities as a European Agenda. How could the EU contribute to the integrated and intelligent growth of urban areas – Brussels, July 12th, 2010 – organised by Oldrîch Vlasák

Representatives of the European Parliament, the European Commission and some larger cities, several URBAN partners and few IBM experts gathered at the seminar organised with the support of the URBAN Intergroup to discuss the potential of the ICT infrastructure in local development. The main point of the meeting was the presentation of the concept “Smarter Cities” that is based on intelligent technologies solutions for the economic growth and social cohesion in European cities.

The aim of the conference organised in the cooperation with the URBAN intergroup was to provide some solutions for the energy efficiency challenges in housing. In two panels, the participants discussed both the financial and social aspects of the refurbishment of houses in Europe. 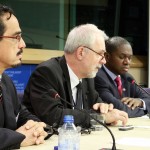 During the press conference chaired by Jan Olbrycht, Eduardo Lopez Moreno Romero (researcher) and Jean B. Bakole (Director of the UN-Habitat representation office to the EU and Belgium) presented the recently published report “State of the World Cities 2010/2011: Bridging the Urban Divide”. The report investigates the challenges facing our rapidly urbanizing population and how the urban advantage, the economic and social benefit of living in a city, can be exploited and enjoyed by all. It is accompanied by a supplement entitled “State of Urban Youth 2010/2011: Leveling the Playing Field” + a research focused specifically on the youth in cities.