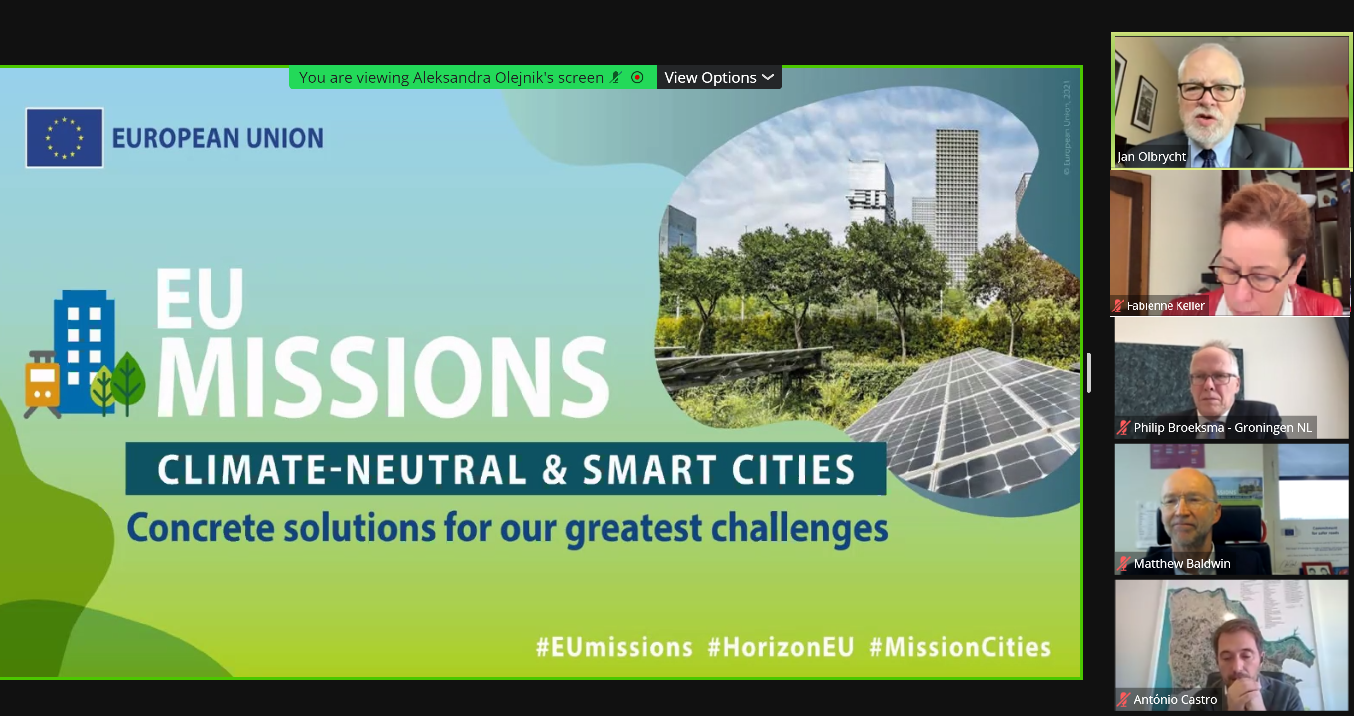 Cities have the ambitions, but few have declared readiness to be fully climate neutral by 2030. Mr Baldwin emphasised that cities need support and this is a reason why the EU executive set the Cities’ Mission with two very ambitious objectives: (1) to deliver at least 100 climate-neutral cities by 2030 and (2) to ensure that these cities act as experimentation and innovation hubs to enable all European cities to follow suit. The Mission Platform, launched on 1 October 2021 is run by the NetZeroCities consortium,a project that will support the delivery of the Cities’ Mission, by working directly with cities to support their transformation with technical, practical, and financial expertise. NetZeroCities is coordinated by EIT Climate-KIC and includes 33 partners, such as universities, think tanks, associations, consultancies, city networks, and research organisations.

Cities with support of the Mission Platform will prepare and implement Climate City Contracts, which will be co-created with citizens and local stakeholders and will build on EU, national and regional funding support. Climate City Contracts will be non-legally binding – Memorandum of Understanding. In this process we will focus on innovative (“holistic”) city governance, investment plan, and monitoring and reporting. Matthew Baldwin strongly encouraged different cities to participate in this Call for Expression of Interest (which should be open by the end of November) and emphasised that is not reserved for the usual suspects – the real geographical diversity and inclusion are very important. The level of ambition, ideas, the plans to implement are key to succeed. The Commission aims to select participating cities in March 2022. As of mid-2022, with support of the Mission, the first cities should start to develop their Climate City Contracts.

Philip Broeksma, Vice Mayor, City of Groningen, the Netherlands, said that energy transition can only be successful if we approach it in the integrated way, by including all relevant stakeholders. He presented Groningen very ambitious target to become CO2 neutral by 2035 which is 15 years ahead national and EU goal. This climate strategy has been in place since 2011. He stressed that the energy transition is not only technical but especially social transition. It should be beneficial for not only climate but also for single inhabitant and sociality as a whole. He presented the roadmap to carbon neutrality with two areas of focus: energy (heat) production (combination of wind and solar power) and heat demand reduction (linked to thermo-isolation of building). Effective public participation is key. However, energy transition cannot lead to the division between inhabitants between who can afford investments and those who do not have sufficient resources. That is why municipalities should take care and support the second group in order to avoid energy poverty.

António Miguel Castro, President of the Board of Gaiurb EM, City of Gaia, Portugal, stressed that cities are the places where the decarbonisation strategy for energy, transport, buildings, industry and even agriculture and food system coexists and intersects. He presented Gaia 20230 Agenda, which supports a European smart, climate-neutral, democratic and sustainable city with a way for social innovation, low carbon development, green bleu and circular economic solutions. Existing ecosystem of the city with its potential in mobility and energy transformation is very important. Moreover, city’s commitment in developing and implementing decarbonisation strategy with active participation of inhabitants was underlined.

Jan Olbrycht, President of the URBAN Intergroup, concluded the event by underlining the importance of citizens’ participation and their acceptance of transformation. Transition towards decarbonisation can be successful if the political will of city politicians and administrators is back by the will of its inhabitants. Without public acceptance of the transformation, no technical solution will be successful.